The first of my 12 in 12 shawls is finished.  I am pleased to say the the seemingly never-ending rows of moss stitch on the Flavia did in fact end.  They lead to a 500 stitch border which was initially very daunting and did result in me texting my husband and telling him that I was seriously considering tossing the whole damn thing under the wheels of the car and driving over it a few times.  I refrained from actually doing that and instead picked up the stitches that I needed and made the border.  (Remarkably, I was only missing one stitch!) And it was worth every moment.  I am super pleased with the final shawl.  I’m going to post pictures in the next week as I still haven’t blocked it.

Unblocked and needing it's ends weaved in.

But, on to number two.  Number two is Arroway by Stephen West.  Aside from having reached the Fair Isle colour work section of the shawl and being slowed down a little, the shawl has been going swimmingly.  It has had, up until this point, the perfect balance of mindless and interesting that means that it comes off the needles relatively quickly.  And just at the point where I was beginning to think that I was getting too bored to carry on, Mr. West threw in some two stranded colourwork and now I’m not bored.  And I love the colours of this shawl. 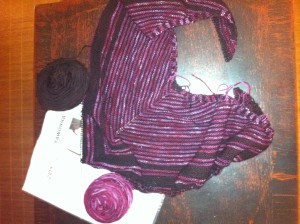 I’m using two shades of Indigodragonfly’s MCN Sock.  The darker of the two is “Who’s a Guy Gotta Kill Around Here to Get a Drink” (it’s an Angel reference), and “Hi I’m Fred.”  These are not two colours that I ever would have put together.  But fortunately, I have a very helpful Hubby. When I went to him and said, “This is what I’m making.  I want the colours to pop” he told me to give him everything that had the right yardage in it, and this is what he came up with.  I was a little skeptical at first (I’m really good at picking colours that blend.  Colours that pop were outside my comfort zone), but I realized very quickly that much like the colour of the bedroom walls, (I was pretty skeptical about that too), I loved these two colours together.  The really good thing is that I had no idea what I was going to use Fred for.  He was clearly stash and now he is happy in the shawl.

So far, I am on track with the 12 shawls in 2012 challenge.  I tip my needles to those who are already on shawls #3 & 4! I think the fact that I know what my next shawl is going to be (Walnut Grove) and that the balls are wound is enough of an accomplishment all by itself.